Does your family have special things they eat that you might think very few other people do? Ours does.

One thing is Coffee Soup. I thought it was just a Spess thing, until I mentioned it online a few years ago. I’ve had more comments about coffee soup than any other subject. I thought it had to be eaten with Mama’s biscuits. Because they have no fat in them, they hold up when surrounded by coffee, sugar and cream. (It really is good stuff.) But from what I’ve learned, some people make it with crackers, toast, or bread! Imagine that! 🙂 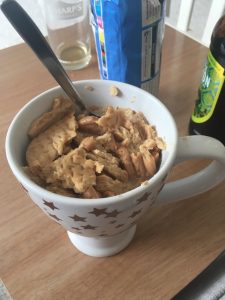 This isn’t really what my coffee soup looks like, but it’s the closest I could find online.

Here’s my blog from several years ago:

Have you ever had Coffee Soup?

Ever heard of Coffee Soup?

Outside my parents’ home, I haven’t. But it’s good stuff. (I’m really curious whether it’s a Spess family thing or if other people enjoy it, too.)

When I was a kid, Mama fixed a big breakfast every day of the week except Sunday. We had pancakes, Squaw Bread, French Toast, eggs–fried or scrambled–and, of course, biscuits and gravy. Kids who rarely ate breakfast at home loved it when they stayed all night with us.

Of course, some of them ate breakfast weird, even with us. They’d do strange (to us) things such as putting peanut butter on their pancakes and powdered sugar on their Squaw Bread instead of syrup, like us ‘normal’ people.

When we had biscuits and gravy, though, most everybody ate it the right way. Oh, some had their biscuits upside down instead of the *right* way, but we understood that some people were just different.

The one thing that seemed to blow every kid’s mind the first time was Coffee Soup. For it to turn out right, you just about have to start with the biscuits my mama made. No fat in the bread makes it a little denser and more likely not to fall apart–necessary when you make Soup. (I tried it once with a canned biscuit. Yuck!)

Break the biscuit up in the coffee cup. Add coffee to barely cover the biscuit, then a spoonful of sugar and enough milk to make it a delicious tan color. Taste. If it’s not sweet enough, add a little more sugar.

Eat it up with a spoon. Try it next time you make biscuits. You’ll be surprised at how good it is!

I had several comments on the first blog about how other people ate it. And when I was looking for images, I saw coffee soup was a depression dish. Who knew??? But it is what it is, isn’t it?

I’ll add Mama’s biscuit recipe so you can try them, too. Let me know what you think.